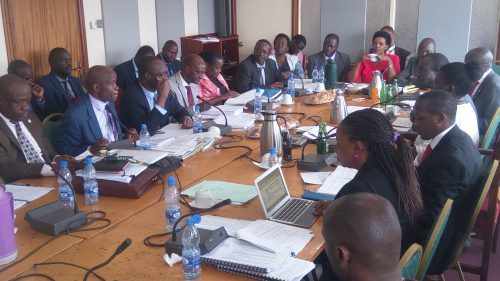 Officials from the ministry of works faced hard time yesterday in the Parliamentary Accounts Committee when they were tasked to account for the unbecoming delay of the standard gauge railway project. The project that started in 2016 was planned to run for five years but two years down the road, no remarkable progress has been achieved as it remains stack on land accusation.

The Lwemiyaga county mp Theodre Sekikubo wondered why the government is incurring much expenses on land accusation to the tune of 553 billion yet the standard gauge railway is being constructed in thew corridor of the old meter gauge railway. But officials claimed that the standard gauge occupies a wider, straight and a flat portion of land thus creating a need for more land.

the committee chairperson Angeline Osege who is the woman member parliament for soroti district was so much disappointed with the project implementer for sleeping on job as Uganda was bewitched citing Kenya where their sister project is registering serious project as Uganda fumbles. She noted that the government is likely to suffer huge losses due to the delays.

In the committee it was reported that the bulldozer which was used to clear the land for the railway it also broke down in Butalejja district which also frustrated the progress of SGR.

Land accusation was planned to be completed in February 2017 but up to now not even 50% of the project affected persons have been paid off. on the 553 billions allocated for compensations only 50.8 have been spent but 97% of the route has been accessed, its now remains doubtful that this project will be completed in 2021 as it was planned
.