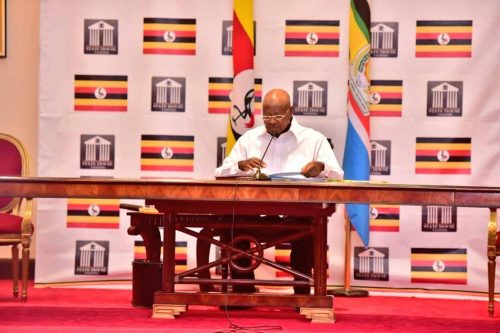 I have, again, decided to address you directly through the radios and the TVs, this time, just on the urban crime that has seen the killings of:

What is worrying and annoying Ugandans is not just the killings. Killings, sometimes, happen in other countries on even bigger scale. As I mentioned in the address of last week, in the USA alone, the following killings have taken place in recent years according to some records:

All these have resulted in the death of a total of 56,214 persons. The difference, however, is that, in the case of the USA and other developed countries, on account of modern eyes (cameras), modern ears (listening to telephones of criminals) and modern noses (smelling for explosives), etc., the perpetrators (the doers of these acts), are quickly known. However, sometimes, even in those countries, the search for a criminal takes time. The example, is the case of the Russian spies that were poisoned by radiation in the Salisbury area. It took quite a bit of time. Even in Belgium, where criminals were springing from to commit crimes in France ─ the night club shooting, the killing of holiday makers in Southern France by driving a lorry into them, etc., it took quite a bit of time to identify the culprits and hold them accountable.

In my address to Parliament on the 20th of June, 2018, I analysed in detail the issues of security. I decided to address Parliament myself, rather than delegating the Minister to give what they call “Ministerial Statement”, because the issues of a country like Uganda, when it comes to security, should not be handled in isolation from one another. They are all linked. It is the liberation of Uganda starting with 27 guns, the recovery of the economy starting from a very low base of US$ 3.4billion, the handling of the social services (education, health, etc), in spite of that very small economy at the time, the fighting of rural terrorism (Kony, ADF, UPA, Itongwa, etc,) and handling the 40,000 illegal guns in the hands of the cattle-rustlers in Karamoja, the building of the infrastructure (the roads, the electricity, the piped water, the ICT backbone, the railway) that was so crucial for the recovery of the economy in the first place, funding the democratization of the country (Constituent Assembly-CA, General elections, Local Government elections, etc) and funding the Administration of the country (salaries, etc). How do you do all this, starting with the tax collection of only Shs. 5 billion in 1986/87, for a medium sized country like Uganda of 93,000sq miles and with a growing population that is now 40 million? On top of all this, add a disloyal and corrupt civil service which, for historical and practical reasons, you cannot and should not get rid of in a crude and hurried manner. In addition, on account of coming from the different back grounds (the National Resistance Army, the Resistance Councils, the Colonial and post-colonial Civil Service, the Judiciary that has its orientation from the British system, the political class that may have a careerist orientation, etc), the ideas of budgeting may, sometimes, be discordant and need patience to achieve a convergence of views and action.

What is remarkable and all the actors that have been involved should congratulate themselves on, is that we have successfully covered every phase, challenges notwithstanding. What were the phases and elements to handle?

How do we manage to fund all these when the government revenues were still low? The answer is: prioritization (Okusosowaza, Kukuratanisa, iyoreiyore, tic kore tikore, Ubata etc). This means that some of the areas are left unattended to, not because we do not know that they are necessary, but because we cannot do everything at the same time. You all saw our soldiers staying in the grass-huts of Maama ingiya pole for a long time. That is how we were able to buy very good weapons that enabled us to deal with the very dangerous regional situations that were surrounding us. Had we made a mistake on that, we would have failed. When we have built 160,381 classrooms from the 28,000 of 1986, but have not yet built teachers’ houses, is it because we do not know that teachers need houses near the schools? When we have concentrated on immunization but have not dealt with the health workers’ houses, is it because we do not know the importance of those houses? No Sir, No Madam.
We know; but we also know that when you try to do everything at the same time, you end up doing nothing. If you try to be everywhere, you will end up being nowhere. That is the strategy and discipline of the NRM that has enabled us to convert the failed State of Uganda into one of the fastest growing economies in the world. Kamukamu gwe mugaanda; akwata empora atuuka wala; bugu-bugu simurilo.

Hence, on the side of Defence and Security, we concentrated on defending the borders (strategic defence), defeating terrorism in the rural areas and ending the massive armed cattle rustling in Karamoja and the whole of the North-East. Those have been achieved. That is how Uganda is an island of peace in this area and is also contributing to regional peace.

Of course, we knew that these items were growing in number. However, we did not anticipate that evil minded people would want to kutokooza (Runyankore ─ for something bad like a fly falling into one’s food or drink) this success story, to turn something good into an instrument of killing Ugandans.

However, even if we had known, we could not easily have dealt with all the challenges at the same time. By, for instance, concentrating on the electricity, the roads, the schools, the health centres, the wider society of Uganda has been able to see that transformation is possible. Would that have been the case if we had only concentrated on the infrastructure and the security of the towns and forgotten the countryside? It would have been bad planning. The people in the countryside would not have known what development and modernization are about.
However, since every corner of the country has seen signs of development (tarmac roads, electricity, new schools, new health centres, mobile phones, etc), we can now intensify our work in the towns, not only in terms of more urban roads, garbage collection, improved sewerage, etc., but also in terms of security infrastructure and cleanliness of the cities and towns. As usual, we always start with security. Hence, my address to Parliament on the 20th of June, 2018. The 10 elements of that speech are being implemented expeditiously. They are:

Finger printing all the guns in Uganda;
Require every motor-vehicle and every piki-piki to have electronic number plates installed at the cost of the owner or inserted in the engine;
Ban the practice of people zooming along our roads with jacket hoods to hide their identity; we need helmets with illuminating numbers both infront and at the back;
Installation of cameras on the town roads and streets and also along the highways;
Having a modern forensic laboratory;
Speed of response and how quickly we arrive at the crime scene;
Controlling the use of UAVs; there are technical means of neutralizing UAVs. The Defence Committee has authorized 30 UAVs, 131UAVs have put in their application and 500 have been impounded.
Misuse of social media ─ criminals use social media to threaten violence and to spread lies;
We shall acquire more scanners under URA to look into all the containers entering and leaving Uganda so that the under declarers of imports stop cheating URA and criminals who infiltrate guns hidden as cargo are apprehended or deterred;
A small Army with a large number of officers, NCOs and technical crews and also with enough equipment but backed by a large Reserve Force.

We had to undertake these measures to modernize our security infrastructure because the short-sighted and their malicious accomplices thought that they could use our relaxed life-style ─ the trans-night dances, the trans-night prayer sessions, the chaotic driving on the roads, etc., to undermine Uganda’s fast development. Hence, our response as was recapitulated above and as was elaborated in my speech in Parliament.
In the meantime, using even the old methods, during the intervening months while the new systems are being put in place, we can still defeat these terrorists. It is laborious, but is possible. What should we do in the interim?

1. First and foremost, vigilance (oburindaara) by noting and reporting any new persons, motor-cycles or cars that hover around your area or you notice following you. The killings of the Sheikhs, Kagezi, Kiggundu, Abiriga and, recently, Kirumira were, obviously, done by people who were either following them or waiting for them. A limited degree of vigilance would have exposed them before the act.

2. Quick coordination with the Police. Each Police Station or Post should have a number that is known to the public in the area that every member of the public with a phone can ring when he/she sees anything suspicious. This number should not be the number of the OC (officer in charge) of the station because that officer may be in meetings where he/she switches off his/her phone. It should be for the police personnel on duty at the Police Station so that the reaction is instant. That is how the Police and the wanainchi killed the notorious Kiddawalime that had been part of the gang that killed 5 people on New Year’s day, 2018, in the Masaka area.

3. Efficient coordination within the Police force using radios rather than the slow methods of using the unprofessional mobile phones. The radios alert everybody to be on the lookout for the fugitive motor-cycle or car rather than a mobile phone that communicates with one person at a time. It should be the Public to use the mobile phones not the Police, while communicating among themselves.

4. The deployment of the UPDF or the Reserve Units, as stated in my address of last week (9th September, 2018), in the Wakiso-Kampala area or any other area where they may be needed.

6. The purge of the criminal and corrupt elements that had infiltrated the Police is continuing. The incidents of crime that have been happening expose these elements. The apprehension of those criminal elements, illuminates more the evil elements involved. The Police force is being cleaned of them.

7. The private citizens that are able should continue to install cameras in their homes or business premises. All these will help.

By the end of 9 months from today, most of the elements of the smart and safe City will be in place. We can, then, scale down the reliance on human intelligence and human observation because the technical (the machine) means will be in place.

I am annoyed and pained by these unnecessary deaths of Ugandans; but I am confident because we have the capacity to respond. We were able to respond and win when we had less means. Our means are much greater today. I encourage investors to assemble the cameras here so as to have more local content.
The pigs that have doomed their future by shedding the blood of innocent Ugandans, have only themselves to blame for their eternal damnation.

With the new teams of investigations, even the old cases of murders are being exposed as to who the killers were. It says, in the Book of Luke: Chapter 12:2-3: “There is nothing concealed that will not be disclosed or hidden that will not be made known. What you have spoken in the dark will be heard in the daylight and what you have whispered in the inner rooms will be proclaimed from the housetops”. Be confident and vigilant. We are going to have safe and smart towns and cities, just as we have been able to create a network of good roads and electricity lines in the country side.