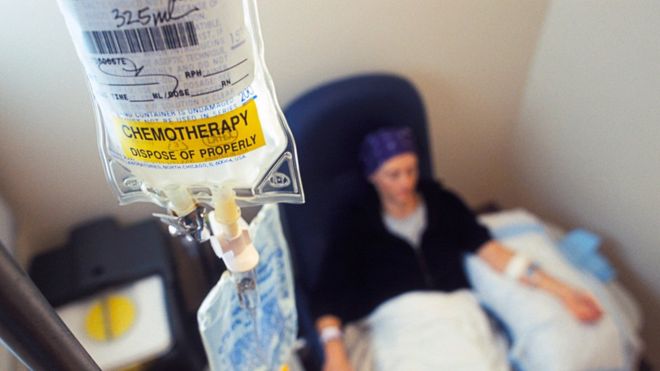 There will be 18.1 million new cases of cancer and 9.6 million people will die with the disease this year worldwide, a report predicts.

The rise, from 14.1 million cases and 8.2 million deaths in 2012, is partly due to a growing and ageing population.

The figures suggest one in five men and one in six women will develop the disease in their lifetime.

And as countries become wealthier, more people get cancers related to lifestyle rather than those linked to poverty.

The International Agency for Research on Cancer (IARC) provides regular snapshots of the scale of cancer around the world, looking closely at 36 different cancers in 185 countries.

Researchers say while ways of measuring and collecting cancer data have improved over the years, the overall trend is that cancer rates and deaths have risen year on year.

The latest report suggests lung cancer, female breast cancer, and bowel cancer are responsible for a third of all cancer cases and deaths worldwide.
‘Tobacco control’

And the authors say lung cancer is now the leading cause of cancer death in women in 28 countries.

The worst hit countries include the USA, Hungary, Denmark, China and New Zealand.

George Butterworth, from the charity Cancer Research UK, said: “Tobacco is the single biggest reason why more women across the world are getting lung cancer than ever before.

“In the UK smoking among women became more prolific later than it did for men, so it’s not surprising that we’re seeing increasing lung cancer rates now.

“Similarly, cigarettes are now increasingly popular among women in low and middle income countries and the tobacco industry’s aggressive marketing to them is influencing this.”

Meanwhile, Dr Freddie Bray, of the IARC, said: “The results highlight the need to continue to put in place targeted and effective tobacco control policies in every country in the world.”
‘Extraordinary diversity’

Overall, the report estimates, nearly half of all cases and most cancer deaths in the world this year will occur in Asia, partly because of the large numbers of people living in the continent and partly because some cancers with higher death rates are more common in this region.

This includes, for example, high rates of liver cancer, which generally has a poor prognosis, in China.

Beyond this, the authors say, there is “extraordinary diversity” in the types of cancer and patterns of illness around the world.

They say because of this countries need to consider tailoring how they try to prevent and treat cancer.