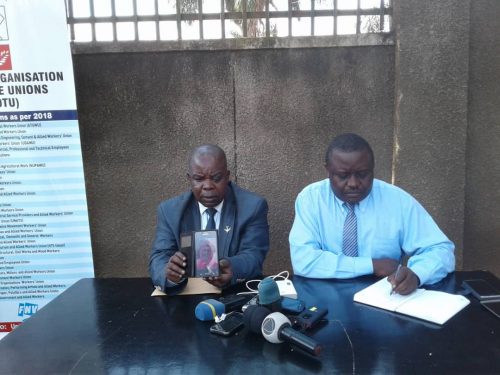 NOTU Wants to Be Included on External Labour Board

The Executive director for the Organization of trade unions (NOTU) Wilson Were is tasking govt to consider including them on the external labour committee that seats in the gender, labour ministry.

The call comes at a time when many Ugandans taken to the Gulf states in search for jobs end up being mistreated with some not paid and others killed mercilessly.

A one Teddy a resident of Entebbe and Hasifa a resident of Jinja both aged 29 are among the 10 female Ugandans rescued by NOTU from Oman where they were taken by unregistered dealers to work in banks which jobs they never glanced their eyes on but to end up in residential to work as house maid where they were tortured.

Now Were says, Uganda needs to set up missions in most of these states to act as fall back centers for Ugandan citizens who may need to be helped.

The secretary general of the union, Christopher Peter Werikhe urges Ugandans seeking for jobs in the Gulf States, to always visit NOTU offices for detailed guidance on the jobs available and the pay they are likely to get when they get there

Uganda has over 100 labour export companies that fly out over 15,000 Ugandan males and females to gulf state to work on an annual basis.
END