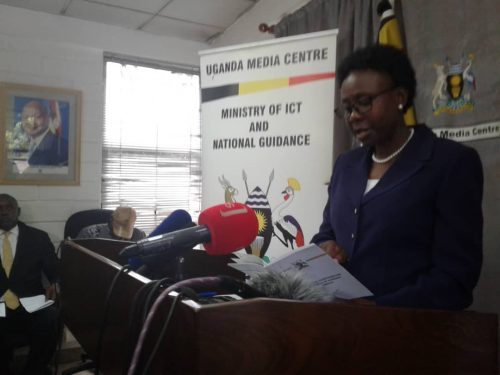 The two alleged tortured legislators were allowed to fly out of the country to seek medical treatment following the heavy beating they received from the security operatives during the time of their arrest in Arua district mid last month ahead of the hotly contested area by election.

Dr. Aceng narrates that, it’s prudent for any citizen to seek permission through the medical attendant, and this must be a qualified and licensed health expert in the field of their health problem before they travel abroad for treatment.

She notes that, permission has to be approved by the medical board after detailed examination from the health facility as well as the board on the current health condition of the patient.

For this case Hon. Francis Zake and Hon. Robert Kyagulanyi the two had to fast undergo thara examination before they were allowed to travel for further treatment.

Hon. Kyagulanyi left on Friday, 31st August to the US and Hon. Zake left on Tuesday 3rd September 2018 for India.

The health minister further details that the reason as to why the two legislators were denied exist in the fast place at Entebbe airport, was because they had no approved examination report from the government which is mandatory for every citizen.

Though Hon. Kyagulanyi complied through his lawyer, Nicholus Opio to be examined and later allowed to fly out, Hon. Zake rejected the examination, hence the delay in his permission to leave for further treatment.

The health minister also adds that, while in Rubaga hospital, Hon. Zake was only attended to by three health officer, one being an intern, Dr. Andrew Ssekitoleko and another unnamed health worker. Abd it was Dr. Ssekitoleko who examined Ho. Zake hence always feeding government with the necessary medical information in regards to Zake’s further treatment.

Meanwhile, Dr. Chris Baryomosi says, its proper for any person seek further medical treatment from developed countries to always seek consultation and permission from the medical board to avoid falling victim while on foreign land. He says the process acts as a backup for the patient and their family in case of any adverse health problem.

Government confirms that there are well laid guidelines for any person seeking foreign treatment that have to be followed and among them is, the patient’s medical attendant to file the examination report with the medical board detailing the health problem and why the patient seeks to leave the country.

The board will then issue permission to the patient to leave the country in case it finds out that the problem cannot be handled by the health experts in the country at a time among other guidelines.

However, the security minister, Gen. Elly Tumwine maintains that the country is peaceful adding that no one is above the law.

It’s here that he warns that the law is going to take its course to have all the culprits in the Arua saga brought to book be it civilians or security operatives.

A good number of ugandans across all devides have condemned the harassment that the state mated on the 35 suspects during the Arua incidence which left most of them seriously injured.