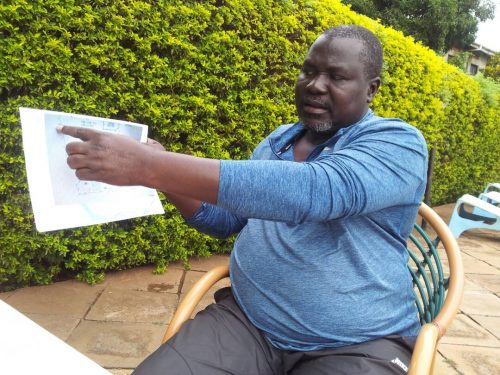 Otema’s outbursts stem from claims by one of the locals in Nwoya district identified as Pierino Jathim who told the Bamugemereire commission that the general was involved in violent land evictions in Nwoya particularly Obira parish.

He said that the commission upon getting such complaints failed to first carry out adequate investigations and yet some of the witnesses according to him are telling falsehoods.

“The way the commission carries out their investigation is not exhaustive. They summon people to come to the commission without hearing my part before I appear. My thinking is that before I appeared, they should have carried out an investigation, ask the community, ask the leadership of Nwoya which they never did! Or if they did, then, they deliberately never wanted to hear anything from the leaders. But those are the leaders who are elected by the people. Why don’t they [commission] listen to local leaders?” he noted.

He said that the local leaders need to be engaged because they have got a list of all people who stayed in Obira before the LRA and that their homesteads are known before they were displaced by the insurgency. He denies any involvement in land grabbing saying all the land he has, he obtained it through legal procedures.

This area is currently under contestation between Acholis and the Jonam. Jathim who accuses Otema is a Jonam and he claims that the general is using his soldiers to witch hunt him.

“All of these are false claims. These are totally false claims. These [accusers] are people who do not observe the law. These are criminals. If they could go and tell lies to the commission; really? These people create their own laws. Like this man Jathim; he is the head of a gang. He put himself as the LC1 yet he is not. There is an officially elected LC1 [called Ocakacon Charles]” he says, adding that Jathim also lied to the commission when he claimed that he was born here in 1956.

However, our investigation suggests that by this time, this area was a game reserve after the colonialists in the early 1900s told the Acholis [natives] to vacate this land for safer places inside Acholi as this place was infested with Tsetse flies. Records indicate that during Iddi Amin’s reign, the land was de-gazetted and the government turned it into a ranch, and people were allowed to apply for leases to also utilize it.

“This torture is just being cooked up and it is baseless claims. This man [Jathim] claims he was born there in 1956 but that time, the land was a game reserve. That’s totally baseless. Now, if it was a game reserve and he says he was born there in 1956, does this make any sense?” Otema says. He says whereas Jathim peddles complain that he is being tortured due to his tribe [Jonam], this is false because there are several Jonam sons who applied for land in this area and were given. Among these includes Onegi Obel, Capt. Onen, Capt. Okeca among others. He, therefore, wonders why other Jonam sons do not want to emulate them and follow the law in accessing this public land.

“They should observe the law if they want to access this public land. They should come and apply for the land. Nobody will stop them. Or, if there are areas which haven’t been occupied and those people want land for settlement, then the government can either apply and give people those [vacant] portions but not to take what people have applied for and been given officially” he said.

He said that this piece of land before turning into public land was initially occupied by Acholis and it is therefore false for the Jonams led by Jathim to claim it calling it their ancestral land. He said that the land probe needs to establish whether this land was originally for Acholis or Jonams and that in case it is declared customary land, then it should be for Acholis.

“If it becomes customary land, it, therefore, ceases to be Jonam land. It becomes Acholi land. The Acholis surrendered it during the colonial time when they were given other places to settle and they gave it to the government. There is a natural border called R. Nile where on one side is Acholis and across is Jonam. But if it is public land as we now know, in case the Jonam wants, they need to apply to use this land. The Acholis follow procedure. They knew this is public land. They applied for titles but the Jonam just want to grab forcefully. And I want to tell you if the government says cancel the titles, the Acholis will go back and occupy that land. That’s when you will witness real [tribal] war. These people [Jonam] are using our being obedient to the law to forcefully occupy this land” he said.

He denied claims by Jathim that he sent his boys to torture him over his piece of land. Otema says to the contrary, his soldiers rescued Jathim as he [for the third time] tried to set himself ablaze. He said Jathim is also involved in criminal activities. For example, he said this person had hatched a plan to burn the huts for the soldiers but when the information leaked and they went to arrest him, his wife ran away and for him tried to set himself ablaze inside his hut.

“This is the 3rd time he is doing this. So, my people helped him not to die in a fire. They forced him out and took him straight to the police. The small injuries he showed to the commission he got them in the process of rescuing him from the fire he started himself. It is shocking that he later turned against the people who helped him. The man was not even beaten but now they claim my soldiers tortured him. Why would someone tell lies to that extent?” he fumed.

He said that such claims that he is involved in violent land evictions are merely meant to discredit him. He vowed to drag anyone peddling such ‘lies’ to courts of law because this taints his name.

“It is just propaganda and as I have told you because I have succeeded in utilizing my land, there are many stories which are fabricated to discredit me. I think the weakness in the law because people don’t want to observe the law. People are coming on their own and force themselves into the public land yet they would have followed the legal procedures of acquiring land like other individual Jonam sons have done. So, sensitization is not the problem but the weakness is that people are being incited by negative politicians” he said.