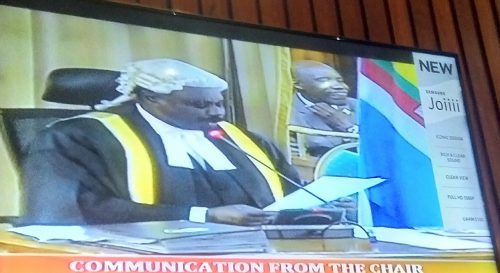 The deputy Speaker of Parliament Jacob Oulanya has announced the recent appointments in the opposition leadership in parliament, that were recently made by FDC party.

Oulanya said that the changes in the office of the opposition leader, opposition chief whip and deputy will take effect as per the rules of parliament, but some changes will not be effected now because the rules do not allow.

Those who will have to wait until the term of the current leaders expires include Francis Mwijukye who was nominated as parliament commissioner replacing Dokolo woman MP Cecilia Ogwal and Busongora North MP William Nzoghu who was nominated as a representative in the Pan African Parliament.

The other positions such as a representative in the African Caribbean and Pacific Parliament (ACP)for jack Wamai wamanga, as a representative at the Commonwealth Parliamentary Association where Mukono Municipality MP Betty Nambooze was appointed and a member of the Inter-Parliamentary union were Rukungiri Municipality MP Roland Mugume was nominated do not apply in the rules of parliament.

The newly appointed leader of opposition Betty Aol Ochan has called for unity among the opposition in parliament as this will give them credibility to form a more formidable and respected force in pushing for alternative development policies.

She has also called for a dialogue to chat a way forward for the opposition. Meanwhile the Government chief whip Ruth Nankabirwa asked ochan to manatain her smile as it will help her to penetrate the hardest points, applauding the FDC party for having replaced Winnie kizza with a lady who will take forward the issues affecting women.

She has also pledged all the necessary support from Government to enable her effectively deliver her work.