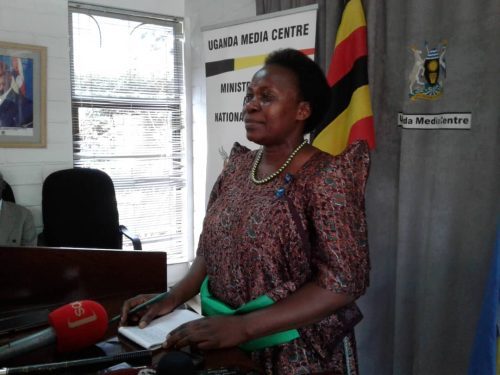 The local government ministry has ordered all local council chairpersons in the country to stop charging the 10% off the land transactions that they witness and sign on, saying this is out of order.

Its been a usual practice by chairpersons at local council-1 to charge a 10% of the money paid for a given piece of land as part of their share for being witnesses and signatories to the agreement between the buyer and the seller and now the ministers for local government are saying no to the practice and caution the newly elected committee chairperson not to engage in such practices.

According to the local government minister, Hon. Tom Butime and his junior, Jennifer Namyangu, they are waiting for the permanent secretary, Mr. Kumumanya Benjamin to draft new guidelines that will be followed by local council committees and among them will be the issue of land transactions among other over seen by these local leaders.

The state minister, Jennifer Namyangu at one point confused the journalist as she then said that they can at least charge a small fee off these transactions which can be used to maintain the offices since they receive very little honoraria from government, a statement which left journalists wondering which state to take as well as believe.

In a related statement, the permanent secretary ministry of local government, Mr. Kumumanya Benjamin revealed that government is planning to continue paying UGX.10,000 to help facilitate these local councils to run their duties since they play a vital role in the governance of this nation at the lower level.

The council are also to play a monitoring role to most government programs among them, operation wealth creation, youth livelihood program and the social protection grants program which caters for the elderly. This according to the ministry is geared toward fostering transparency and accountability of government driven programs.

Section 48 of the local government Act permits local councils or the leaders to perform a series of duties on behalf of the mother ministry among them being, settling family, community disputes, monitor development, enforce law and order among others.

Uganda has over 60,800 parishes and most of these have elected their local leaders with a few still remaining, are to elect their leaders as guided by the electoral commission.