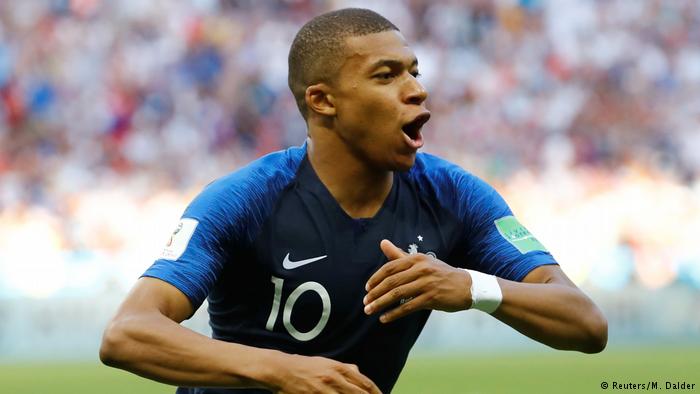 At times like this, it’s easy to forget that Kylian Mbappe is still only 19.

The Parisian wasn’t even born when France won their sole World Cup in 1998, but he’s rapidly becoming France’s key man in their quest to win a second world crown.

From the start of this classic, Mbappe was a handful for an Argentina defense that lacks the youth, speed and mobility that Mbappe has in spades.

France took the lead through Antoine Griezmann’s penalty, which was cooly dispatched after Mbappe outstripped half the Argentina team for pace with a searing run that started in his own half. The burst ended with Marcos Rojo hauling the PSG striker to the ground.

Argentina dominated possession but struggled to do anything with it, while France were far more explosive on the ball, with Mbappe’s pace causing Argentina’s defence all kinds of problems.

But Argentina hit back in emphatic style, with Angel di Maria arrowing a long-range shot past Hugo Lloris.

Things got even better for Argentina three minutes after the break, when Gabriel Mercado inadvertently redirected Lionel Messi’s shot past the wrongfooted Lloris.

But Argentina’s lead lasted only seven minutes as the game’s second stunning strike saw France draw level through Benjamin Pavard. The Stuttgart right-back ran on to a loose ball on the edge of the box and caught it perfectly, cutting across the ball and sending it beyond the dive of Franco Armani.

That swung the momentum France’s way and Mbappe did the rest, scoring two fine goals to ultimately put the game beyond Argentina. His first came from close range, shifting the ball brilliantly to his left and low under Armani. The second saw him slot in after France had worked the ball impressively from the back.

Argentina were on the ropes at this point and couldn’t break down a France side who were sitting deep and soaking up the pressure. They made it interesting in stoppage time when Sergio Aguero rose well to nod in Messi’s cross, but it was too little too late for the Argentines.

France go through to the last eight, where they will meet Uruguay.

FULL TIME: Well, where to start with that one? A breathless game that sets the bar high for the knockouts. Kylian Mbappe produced one of the performances of the tournament so far, there were wonder strikes from Benjamin Pavard and Angel di Maria and almost the most dramatic of late comebacks. But at the end of it all Lionel Messi and Argentina are going home while France will play the winner of Portugal vs. Uruguay later on.

90+5′ – Last chance and Argentina get it forward down the left. The cross comes in and Fazio flicks over the bar. And that’s it.

90+3′ – Pogba is chopped down by Mercado and the players engage in a spot of handbags which sees Giroud booked. Really stupid stuff from Argentina.

90+3′ – GOAL! They can’t can they? Messi clips in a lovely ball to the back post and Aguero rises to head home. Two minutes left.

90 – Di Maria glides past Hernandez, cuts back and hits a weak shot, which is blocked by Umtiti. There’s four minutes of injury time.

88′ – Thauvin enters the fray in place of Mbappe. What a performance from the 19-year-old. He hadn’t even been born when France won the World Cup in 1998.

OptaJoe
✔
@OptaJoe
2 – Kylian Mbappe is the first teenager to score at least twice in a World Cup match since Pele vs Sweden in 1958. Boss. #FRA #ARG #FRAARG #WorldCup

8:30 AM – Jun 30, 2018
8,505
4,516 people are talking about this
Twitter Ads info and privacy
85′ – Oh Lionel! Messi bursts through the middle and is suddenly clean through. The ball is slightly behind him and on his right foot but it’s still a desperately poor finish and trickles in to Lloris’ arms. Last chance?

83′ – France remove Griezmann, who got a knock a moment ago. He’s replaced by Fekir.

82′ – Di Maria gets past Pavard but his low cross is easily cleared. Argentina don’t look likt they’re getting back in this one.

80′ – Messi does well to find Meza but the good work is wasted.

78′ – Griezmann is almost on to a straight ball over the defense but Armani just beats him to it.

74′ – In all the Mbappe-related excitement, I missed a booking for Matuidi, which means he’ll miss the quarter final. Assuming France go through.

73′ – Pavard cleans out Di Maria. Argentina whip in the free kick. Kante brings it out and finds Mbappe, who messes it up for a change. France are sensing the killer blow here.

71′ – Giroud almost seals it, but hits the side netting.

69′ – He’s done it again! Mbappe puts France two up! France build brilliantly from the back and Giroud slips the PSG man in. He cooly slots home from 12 yards. What a game he’s had.

64′ – Now it’s definitely France in control, Mbappe scores. Hernandez gets away down the left and whips it in for Matuidi. His shot is blocked but falls to Mbappe. The teenager shifts the ball brilliantly to the left and drives it low. It’s close to Armani but too powerful. France are back ahead!

61′ – So, half an hour left and it’s almost impossible to tell who is in command here. What a start to the knockouts.

57′ – PAVARD! What a strike from the Stuttgart man. A loose ball bounces through to the right back, he cuts across it – much like Nacho in Spain’s game against Portugal – and catches it perfectly, sending it spinning rapidly over Armani’s right-hand and in to the top corner. That’s two of the goals of the tournament in this match. What a game.

56′ – Almost disaster for Argentina. Fazio seems to have a Giroud through ball under control but inexplicably knocks the ball past his own keeper, Armani. Griezmann is on to it but is just about crowded out by Armani. Shocking stuff from the substitute.

55′ – Pavon gets some space down the right hand side but slices his cross out of play. France haven’t really started in this second period.

53′ – Mbappe stands over a free kick on the left, level with the edge of the box. It’s an excellent ball but Otamendi is up well to clear.

50′ – Mbappe has is getting a bit of a kicking here. Di Maria and Banega are the latest Argentinians to have a pop.

48′ – GOAL! Argentina are in front. Banega’s freekick was cleared as far as Messi. He shuiffles to create a yard and then strikes at goal. The shot deflect off Mercado, who looks like he was trying to control it, and goes in.

47′ – Di Maria does brilliantly to dance past Pavard, who tugs his shirt to give away a free kick near the byline on the right-hand side of France’s box.

46′ – Here we go again. Argentina get us underway and have replaced Rojo, who was booked when he gave away the penalty, with Fazio.

HALF TIME: That turned in to a very decent half of football but Argentina can count themselves fairly fortunate to go in level. They had a lot of the ball but didn’t have much of a plan, fortunately they did have Angel di Maria. But France look a huge threat on the counter, with Kylian Mbappe very much in the mood. It’s going to be an interesting second 45.

45′ – The stands of the Kazan Arena is full of Argentina shirts and they are all bouncing around right now. That was an exceptional strike from Di Maria but it was totally against the run of play.

42′ – Mascherano finally goes in to the book after lunging wildly again.

41′ – Wow! Angel Di Maria has equalized for Argentina with an absolute pearler. He picked up the ball 25 yards out, realized there wasn’t a Frenchman in the same postcode and whipped an absolute peach with his left foot that curled past Lloris.

40′ – Pavard and Mbappe exchange passes down the right. The Stuttgart man clips it in to the box but it’s slightly too high.

37′ – Messi takes in a Di Maria pass and hits the deck in the box. Nothing doing for the referee.

35′ – Argentina have had more than 70 per cent of the ball but done almost nothing with it. This formation is not working out at all.

33′ – Mascherano blatantly kicks Pogba from behind but has still somehow escaped a booking. His team are lucky the referee is in such a lenient mood.

31′ – France look at their most dangerous when Argentina lose the ball, as they do here. Pogba drives forward and finds Mbappe, who has been unplayable so far. The PSG man tries to dance round Tagliafico but the left back does well to make the tackle.

28′ – A decent moment from Argentina. Mercado dinks one over the top for Pavon, whose cross strikes Umtiti’s arm. The Argentinians want a penalty but the Barcelona defender was trying to get his arm out the way of the ball.

26′ – Now it’s Griezmann’s turn to get away from this creaky Argentinian defense. He shakes off his man down the right and drives a low cross across the goal but Armani claims it.

22′ – Argentina finally get the ball down the other end and win a corner, but it’s easily cleared.

19′ – Mbappe is in again, this time taking down a brilliant raking pass from Pogba and is shoved to the ground by Tagliafico. He gets away with a yellow but the full back was the last man there. He can count himself lucky to still be on the the pitch. Pogba punts the dead ball over.

16′ – That run from Mbappe is likely to go down in the World Cup annals. He took advantage of a mix up Banega and Tagliafico and just kept going, making Mascherano look every one of his 34 years. He was possibly heading to a tight-angled finish, making Rojo’s challenge (pictured below) questionable.

13′ – Griezmann strikes it low and central, it’s in and France lead.

11′ – Penalty to France! Mbappe runs fully 70 yards from his own half. His pace is incredible and he powers past three or four defenders before being bundled down by Rojo. Sensational run.

9′ – It’s Griezmann to take. He strikes it sweetly with his left peg but is denied by the crossbar. So unlucky for the Atletico Madrid man.

8′ – Mbappe drives through the center of the pitch and is taken out by Mascherano as he tries to lay off to Giroud. Griezmann and Pogba stand over the freekick.

5′ – Di Maria races on to a lovely through ball but smashes a cross to no-one. A bright start from Argentina here.

3′ – Pogba clips Perez near the halfway line then Umtiti chops down Messi but avoids a booking, possibly fortunately.

15:55 – Both teams are out and ready for the anthems. Argentina in their famous light blue and white striped shirts and France with blue tracksuit tops.

15:50 – Varane, Umtiti and Lloris are pumping each other up in the tunnel. The French backline has only conceded once so far, a penalty in their opener against Argentina. Can Argentina’s new formation, presumably featuring Messi as a ‘false nine’ find a way through?

15:45 – After the traumatic experience of a whole day without World Cup football, we’re back with a bang as a real heavyweight clash kicks off the round of 16.

Argentina have really struggled to click in Russia and have left out Gonzalo Higuain and Sergio Ageuro as they bid to get the best out of Lionel Messi, whose stuninng goal went a long way to securing them this fixture. France continue with Olivier Giroud up top with Kylian Mbappe, Antoine Griezmann and Blaise Matuidi behind him. Stuttgart’s Benjamin Pavard continues at left back.

Here are the Starting XIs for #FRA and #ARG ?#FRAARG