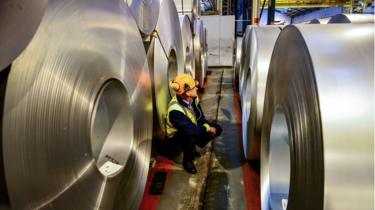 US Treasury Secretary Steve Mnuchin has faced sharp criticism from angry finance ministers of other G7 nations over America’s imposition of new tariffs on steel and aluminium imports.

President Trump insisted on Twitter that the US had been “ripped off by other countries for years on trade”.

He says the steel tariffs will protect US steelmakers, which he says are vital to national security. Mr Trump has also complained about barriers US firms face in Europe and elsewhere.

“Time to get smart!” he added.

Allies retaliate with levies on jam, lamps and sleeping bags
Five reasons why trade wars aren’t easy to win
Four reasons Trump is hanging tough on trade
What happened at Whistler?
At a heated meeting in the Canadian ski resort, the EU and Canada threatened to retaliate.

But Mr Mnuchin denied that the US had abandoned leadership in the global economy and said he had passed on the other countries’ strong feelings to Mr Trump.

Report
End of Twitter post by @realDonaldTrump
There was no joint statement at the end of the meeting, which the BBC’s North America correspondent Chris Buckler says is a clear sign of discord.

Our correspondent says acrimonious debate is likely to continue next weekend when the leaders of the G7 countries – including Mr Trump – meet for a summit in Quebec.

What about the China talks?
Mr Ross is in Beijing seeking deals on agriculture and energy to narrow the yawning US trade deficit with China.

Mr Ross said the talks had been friendly and frank but gave no further details.

Mr Mnuchin said the talks with China were also intended to bring about structural changes to allow US companies to compete fairly.

What are the tariffs?
On Thursday, Mr Ross said tariffs of 25% on steel and 10% on aluminium had come into effect.

They apply to items such as plated steel, slabs, coil, rolls of aluminium and tubes – raw materials that are used extensively across US manufacturing, construction and the oil industry.

Media captionTrudeau: Canada not US national security threat
Mr Ross said talks with the EU, Canada and Mexico had not made enough progress to warrant holding off from imposing the tariffs.

What has the response been?
Leaders from the EU, Canada and Mexico have criticised the move.

French President Emmanuel Macron has called Mr Trump to tell him the tariffs were “illegal” but was told by Mr Trump that there was a need to “rebalance trade” with the EU.

The EU has issued a 10-page list of tariffs on US goods ranging from Harley-Davidson motorcycles to bourbon.

Image copyrightGETTY IMAGES
Image caption
The EU is to hit back with tariffs on Harley Davidson motorcycles
Canadian Prime Minister Justin Trudeau has said the US move is “totally unacceptable”.

Canada plans to impose tariffs of up to 25% on about $13bn worth of US exports from 1 July. Goods affected will include some American steel, as well as consumer products such as yoghurt, whiskey and coffee.

Some prominent US Republicans have also voiced opposition.

House Speaker Paul Ryan has said the move “targets America’s allies when we should be working with them to address the unfair trading practices of countries like China”.