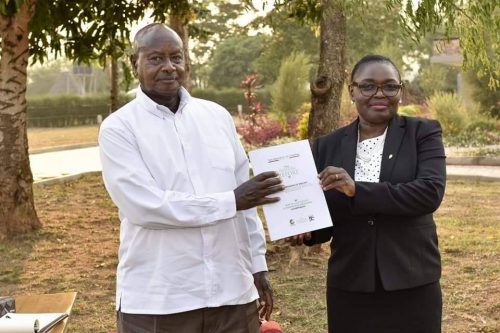 President Yoweri Museveni has extended the term of the Commission of Inquiry into Land Matters for the next 18 months. This was after the Commission’s initial one year term ended yesterday 9th May 2018. In December 2016, President Museveni appointed Court of Appeal judge, Catherine Bamugemereire to head the seven-man committee to probe into land matters but the Commission had been held up for several months due to lack of funds hence starting its work in May 2017. While addressing Journalists today at the National Archives Center, Justice Catherine Bamugemereire communicated the President’s decision to renew the term of her Commission in a legal notice No.6 of 2018.  According to Bamugemereire, the President under the same legal notice dated 4th May 2018 also appointed Dr. Douglas Singiza as Secretary to the Commission replacing Lady Justice Olive Kazare who was earlier promoted to a Judge of the High Court. The President also appointed Daniel Lutiba as a Deputy Secretary and John Bosco Suuza Lujakata as Deputy Lead Counsel from Assistant Lead Counsel and Andrew Odiiti as new Assistant Lead Counsel of the Commission. Bamugemereire pledged that her commission will continue to work in order to achieve the goals of the terms of the commission.  Ebert Byenkya, the Lead Counsel of the Commission told Uganda Radio Network that the 18 months extension starts counting from the date of the issued legal notice and that they hope to have a final report on the land inquiry at the end of the 18 months. He said that the commission is next week planning to give an update on their inquiry for the past one year and the pending cases.  Byenkya however said that the Commission does not have the required finances for the next 18 months. He hopes that the funds will be provided in the 2018/2019 financial year. The Commission of Inquiry into land matters has so far spent Shillings 13 billion in the past one year with another supplementary request of Shillings 7.8 billion before Parliament’s Budget Committee. This is the third time President Museveni has extended the term of the commission. The initial six-months tenure started in May 2017 and expired on November 9, 2017. The President them granted them another extension for six months.The commission’s mandate is to probe efficiency of the laws, policies and processes of land registration, acquisition, administration and management.  It is also tasked with scrutinizing the work of relevant bodies in the reservation of wetlands, forests, road reserves, and national parks, among other gazetted spaces.  The probe is mandated to investigate and inquire into the role of the Uganda Land Commission (ULC) in administering public land and the Land Fund. The commissioners are Frederick Ruhindi, Mary Oduka Ochan, Robert Ssebunnya, Joyce Gunde Habaasa, Dr. Rose Nakayi and George Bagonza.