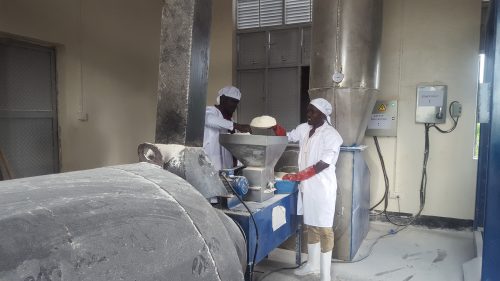 Farmers engaged in cassava value addition in Lango region are smiling home after an upgrade from open air processing to use of high precision indoor modern cassava flash dryers, a technology that offers the best answer to weather challenges especially during wet seasons when cassava processing comes under burdens of rains, thus affecting the quality of the end product as it takes longer to dry and is also exposed to contamination of all sorts.

The flash dryer is a state of the art machine designed to dry wet cassava mash extracted from the cassava graters into High Quality Cassava Flour (HQCF) within 3 minutes ready for human and commercial use.

The Country Manager CAVA II Uganda, Mr. Francis Alacho says the industrial potential in cassava is high and technologies such as the flash dryer will greatly release this potential. He says “cassava has for a long time been traditionally taken as a famine crop grown mainly to ensure food security in homes, and largely regarded as a food for the poor. But, research on the crop has shown its versatility as a highly commercial crop used in various industries. If processed, you end up with raw materials that many industries need.”

75% of the farming households in Northern Uganda grow cassava, a crop the region highly depends on as a staple.

Realizing this potential, the CAVA Project provided technical back stopping, knowledge and skills development to beneficiaries trained in value addition along the cassava value chain. “As CAVA II project, engaged in increasing the income of smaller holder farmers through participation in profitable, sustainable value addition, we sold the idea to commercial farmers where to find modern Flash Dryers to up their value addition capacity. Ours is to make linkages for technologies, markets and high improved yielding cassava varieties to farmers,” he adds.

Mr.Alacho says the project’s intervention has opened doors to other actors who now realize the potential of cassava as an industrial crop and are now taking initiative to prioritize it.”

One of the investors in the technology, Mr. Ivan Okori, the Managing Director at Wind Wood Millers cassava factory in Lira, says the Flash Dryer is sky rocketing processing of fresh cassava tubers into High Quality Cassava Flour (HQCF).“TheFlash Dryer guarantees constant processing of fresh tubers into quality flour, irrespective of the weather burdens. We no longer rely on sunshine to guarantee output,” says Okori.

The factory is constantly supplied fresh cassava root tubers by over 1,000 farmers across the region that have been contracted to supply these on a daily basis.  To acquire this technology, one must have 300-500 million Uganda shillings.

Uganda processes about 6 million metric tons of cassava every year.

CAVA II is implemented in 5 African countries of Uganda, Nigeria, Malawi, Tanzania and.