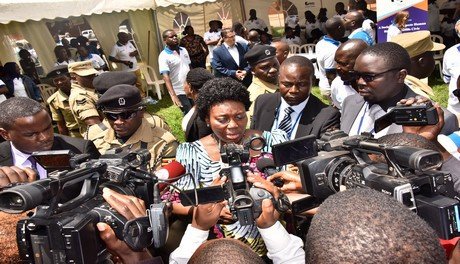 The Speaker of Parliament, Rebecca Kadaga, has asked government to create a special fund to aid journalists who suffer violence at the hands of security forces.

Kadaga was speaking at celebrations to mark the International Press Freedom day, themed ‘Keeping Power in Check: Media, Justice and The Rule of Law.’ The celebrations were held at the Railway Grounds in Kampala.

The Danish Ambassador to Uganda, Mogens Pederson, who read a statement on behalf of the European Union, castigated Police for journalists’ rights violations.

“It appears many violations by security forces are never reported, this creates a climate of impunity,” said Pederson.

He criticized government for the shutdown of social media houses during the 2016 general elections.

“I must admit that we have experienced some drawbacks, including violence against journalists on duty, especially by the security forces…the Uganda Police continues to be the major violator of freedom of journalists,” said Kaggw parliament preunit.

Ofwono Opondo said the biggest threat to journalists in the country is private business interests who exploit scribes.

“Many of you work without appointment letters, without pay and that leaves you to extort money from sources and the public. You cannot claim to be the fourth estate when you are corrupt and act in arbitrary manner,” said Ofwono Opondo.

According to 2018 ranking by Reporters Without Borders, Uganda ranks 117 on media freedom index, behind Kenya and Tanzania at 96 and 93 respectively.