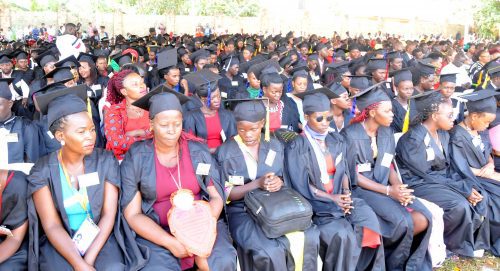 Presiding over the pass out of trainees on 27th -April – 2018 with the biggest percentage comprising of female citizens, the President of the republic of Uganda, H.E. Yoweri Kaguta Museveni attributes the continuous biting poverty resulting from rampant unemployment to lack of self confidence among Ugandans and African who don’t bather to understand the laws of nature what most people call science.

All the scientific laws are part of nature, chemical reactions, physical, biological processes which influence things are also part of nature, and hence the need to understand the characteristics of natural phenomena is what constitutes science. Says Museveni.

The president further praised Dr. Grace Nambatya for passing on knowledge to the youths of this nation and did not keep it to herself, saying, this adds much to the country’s knowledge base coupled with innovation, hence the creation of more new products which in the end reflects through income increase among Ugandans. He further asks Uganda to jealously guard and pay patent rights of one of the best trees called,” Omukuza numi” which is said to be good at producing herbals that treat a variety of disease among man.

However, the minister of state for the youth and children affairs, Hon. Nakiwala Kiyingi thanked the president of Uganda for his continued support to the association not forgetting PSFU under the skills development fund project which has enabled them move out to 230 associations across the country teaching them how to develop skills in which they can a living and realize positive change in their lives as well as those of people around them. We are now in 50 districts across the country targeting the youth and female citizens with many tasked to form cooperatives. Says Kiyingi.

Ruth Musoke, the head of the skills development fund at PSFU  reveals that 100% of the initiative is funded by skills development project to get Dr. Nambatya, the national drug authority (NDA) on board to see that the skills passed on to the trainees are certified and are of great value to them.

Ruth further tells the president and other dignitaries present that the SDF is supporting 280 groups in 80 districts across the country with the ministers acting as ambassadors in some of these districts and on this note, she mentions, Hon Vincent Bamulangaki Sempijja, the agriculture minister, Hon Nakiwala Kiyingi, the youth and children affairs minister and others who are now doing the ambassador role in their areas and in other parts of the country. She then assures the president that they fund all colors in the national political spheres, religions, tribes.

Now, the world bank representative, was pleased to witness the 1st results of the project the bank funds produced and hopes that they products will get out to the job market to cause positive change as he notes the importance of skills towards the growth and development of a nation and it on this note the he stated that world bank is committed to supporting reforms in the sector.

Then, the executive directors of the association, Hamfrey Mutebi and Dr. Grace Nambatya also expressed pleasure for the support from government and PSFU in particular which has enabled them sustain and build on their dream to skill Ugandan youths and the elderly. Dr. Nambatya also called for more financial support from the president totaling to UGX.260 million to get more machines to help them produce more herbal medicines which the president agreed to provide in the coming financial year.

UNAYIDA launched way back on 22 September 2016 in New York and rolled down to Uganda is located in Mutundwe parish, Rubaga division, Kampala district and with a possibility of developing joint mechanisms that will strengthen and support the implementation of further apprenticeship training, production of highly standardized herbal products, above all identification and nurturing young Ugandans to explore the prospects of developing the herbal industry in Uganda as a means of attaining sustainable economic growth and development.