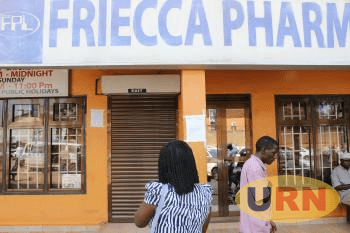 National Drug Authority-NDA has closed Friecca Pharmacy in Wandegeya, a Kampala suburb for allegedly operating without a license. “Friecca Pharmacy located in Wandegeya; Kampala has been operating without a license issued by the Authority contrary to section 14 of the National Drug Authority Act Chapter 206 of the laws of Uganda. We wish to reassure the public that the pharmacy will open as soon as a 2018 license is obtained,” reads NDA’s statement in part. Adding that; “The authority remains committed to ensuring safe, efficacious and good quality drugs are available to the population of Uganda at all times.” NDA has asked the public to remain vigilant and purchase drugs only from licensed pharmacies and drug shops. Friecca is a household name in Uganda’s Retail Pharmaceutical sector. In a statement pinned on its premises on Plot 160 along Haji Musa Kasule Road in Wandegeya, Friecca insists that it is compliant and describes the closure as unfortunate and temporary.  “Management of Friecca Pharmacy wishes to reassure stakeholders that the entity fully complies with all legal and operational requirements of the highest standard,” said Friecca management in a statement. The closure of Friecca has affected dozens of people who rely on it for medicine. Efforts to speak to some of the clients who had showed up to purchase drugs were futile as they seemed reluctant to comment on the issue. Hawkers around the building, say they also found the premises closed and could not delve into details.