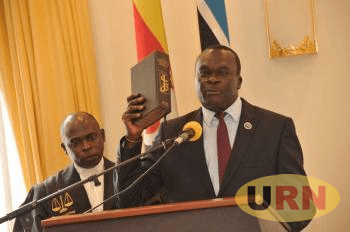 Deputy Chief Justice, Alfonse Owiny-Dollo is leading a panel of four other judges to hear the petition filed by Uganda Law Society and six opposition Members of Parliament. Other justices hearing the petition are Kenneth Kakuru, Elizabeth Musoke, Remmy Kasule, and Cheborion Barishaki.

Justice Owiny-Dollo made the assurances about how they intend to proceed with the matter as the hearing into the petition opened in Mbale district. The judges explained why the constitutional court is this time around sitting in Mbale instead of its headquarters in Kampala.

Justice Owiny-Dollo also head of the Constitutional Court said the judges are determined to ensure justice to the petition which he said is akin to public interest litigation.

He said the petition is not just about the five or so petitioners and that the ‘eye of the country’ is on the Constitutional Court to know what it will decide. Owiny-Dollo said the court will indeed decide.

Justice Owiny-Dollo threatened to throw out of court any person that would want to politicize the process of the court, maintaining that that the court’s process is purely judicial. He advised that whoever will be dissatisfied with the Court process or it ruling to appeal to a higher court.

Deputy Attorney General, Mwesigwa Rukutana interjected as Justice Owiny-Dollo made his statement. Rukutana was seeking to raise his concerns regarding letters written by one of the petitioners, Male Mabiriizi. Mabiriizi had earlier written to Deputy Chief Justice seeking the disqualification, Elizabeth Musoke from hearing the petition.

Mabiriizi had allegedly doubted Justice Musoke impartiality claiming that she had sired children with Ministers Mwesigwa Rukutana, and Hillary Onek.

Justice Owiny-Dollo confirmed receipt of the letters but said it is not part of the court record. Owiny-Dollo lamented the fact the lawyers that took the same letters to his chamber decided to circulate the letters through social media.

He said Mabiriizi has indicated that he will not be pursuing the letters as the hearing kicks off. He warned the lawyers that they risk contempt of court proceedings if they don’t try to interfere with the administration of the court.

The judges also addressed themselves to the controversy arising from the decision by the Court to hold hearing into the petition from Mbale.

Justice Remmy Kasule reechoed Justice Owiny-Dollo’s explanation on why the court is holding its hearing in Mbale. He said the court has been elsewhere in the country on criminal matters

Without specifically commenting on reports that Mbale town was flooded with security operatives, Justice Kasule urged security operatives and those in authority to allow people to access the court so that they can follow its proceedings.

Justice Kasule asked parties to the petition to concentrate on its substance. Justice Cheborion Barishaki said it is important that both parties don’t lose the focus on the issues that have taken them to court.