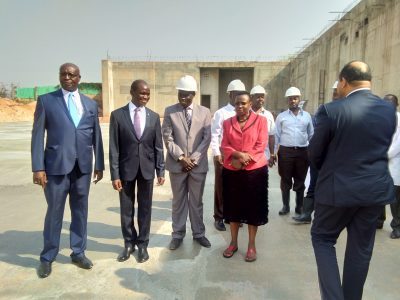 The New Radiotherapy Cancer Machine is not Fake Minister.

The health minister Jane Ruth Acheng, has dismissed reports that the radiotherapy machine recently acquired from Czech Republic for cancer treatment is fake.

The minster’s remarks came during the commissioning of the Cobalt -60 Radiotherapy Machine at Uganda cancer institute that replaced the old one that broke down in March 2016 leaving the country in missery as there was no better option for cancer treatment.

She said the new cobalt radiotherapy machine came with many capabilities compared to the previous machine, its newmatically driven source drawer used for moving the machine between shielded positions and treatment positions and it’s digitally managed.

“so i want to erase the myth and imaginations that has been moving around in the media and all over us that the machine we brought in is substandard, this is ultra-modern cobalt machine as has been approved by international atomic energy agency,Dr Acheng noted.”

Meanwhile the state minister for energy Hon Simon D’Ujanga has assured the country, that the the cobalt -60 Radiotherapy was procured carefully, and that the banker, the machine is installed is well matched.

He said the ministry has atomic energy council specialist charged with the responsibility of ensuring safety of the environment and the personnel who are working there.

“This machine is very safe, it’s up to the standards, and it was procured carefully and fits the purpose for use, its very safe indeed Minister D’Ujanga said .

As a result of a long term good relationships with international atomic agency, more support will be needed not only in expanding radiotherapy services in Uganda but also other technics of development such as nondestructive evaluation in the emerging oil and gas sector.