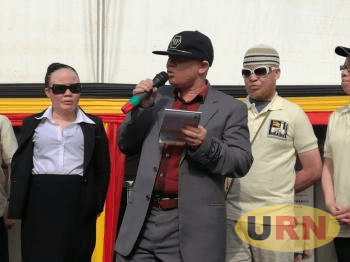 By URN.
Jude Sekyanzi, Executive Director Uganda Albinos Association wants government to set up a special fund for albinos just like it has done for other special interest groups such as women, youth and the elderly.

Speaking during the launch of the parliamentary week group this morning, Sekyanzi said the fund will help people living with albinism to live a healthy life despite the discrimination.

He explained that currently people with albinism struggle to access support and services due to their condition, adding that a special fund will go a long way in transforming their lives.

Sekyanzi also called for special consideration of albinos in schools, saying their exams should be printed in large fonts because of visual challenges.

He also called for the inclusion of albinism in the Universal Primary Education policy, which he said doesn’t address their concerns.

The Speaker of Parliament, Rebecca Kadaga who launched the Parliament week, said there is need to legislate against the discrimination of albinos. She promised to initiate debate on albinism and how to support them when parliament resumes.

Kadaga also called on persons with albinism to apply for Parliamentary service jobs that will be advertised soon. The Parliament week is aimed at bringing Parliament closer to the people, through debate between the public and MPs, display of roles of MPs and different departments of Parliament.

The week has also been dedicated to mobilizing funds to build a facility for people with albinism. So far Shillings 75 million has been raised in the campaign, which targets to raise Shillings 5 billion for the construction of a medical center and school for albinos. There is an estimated 15,000 persons with albinism in Uganda.

Albinism is a non-contagious, genetically inherited condition that affects people worldwide regardless of ethnicity or gender. It results from a significant deficit in the production of melanin and is characterized by the partial or complete absence of pigment in the skin, hair and eyes.

In order for a person to be affected by albinism, both parents must carry the gene and, in that case, there is a 25% chance that a child will be born with albinism at each pregnancy.