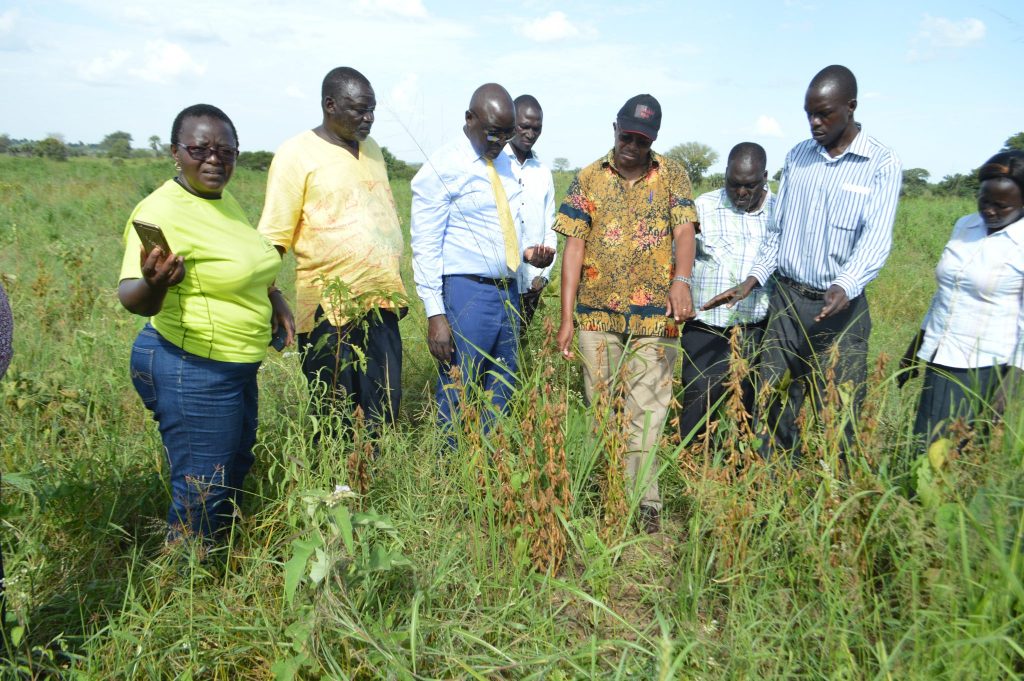 The minister of agriculture, Animal Industry and Fisheries, Vincent Bamulangaki Ssempijja has urged every homestead in West-Nile region to grow enough food for both consumption and commercial, to uplift their standards of living.

Ssempijja together with manager Vegetable Oil Development Project (VODP) in the ministry of agriculture, Mr. Connie Masaaba were meeting soybean farmers at Alurunga Village-Ukusijoni Sub-county in Adjuman District yesterday 5th/10/2017, the minister said he traveled with the ministry`s experts to West-Nile to ascertain the level of food security in the region and also to put emphasis on the performance of oil crops like simsim, ground-nuts and soybean in the area.

He added that if land in West-Nile region utilized well, Uganda will become a food basket for the East African community in a few years to come, and while handing over cassava plantlets to Gimara Sub-County chairperson in Moyo District, Awomi Sam earlier in the day, Ssempijja had urged political leaders in the area to help government and mobilize their electorates on the need to have enough food in their homesteads and the country at large

Adjuman District Production Officer (DPO), Dr. Anthony Mugeni outlined some of the challenges faced with farmers in his area, ranging from poor weather conditions, lack of machineries, lack of transport for extension workers, low funding and pests and diseases, and urged government to come in for their rescue.

According to the National Food Security Assessment report of 2017, 26 percent of the total population in the country is facing stressed food security. All regions in the country have stressed population with east central having the highest population at 1.88 million, followed by south western 1.24 million, Teso with 1.1 million and West Nile at 1.04 million.

The report also indicates that the recent prolonged dry spell due to la nina event coupled with increased incidences of crop and livestock pests and diseases, such as cassava brown streak, cassava mosaic, maize stalk borer, striga and banana bacterial wilt considerably affected production reducing the availability and accessibility of food for the population in the country.