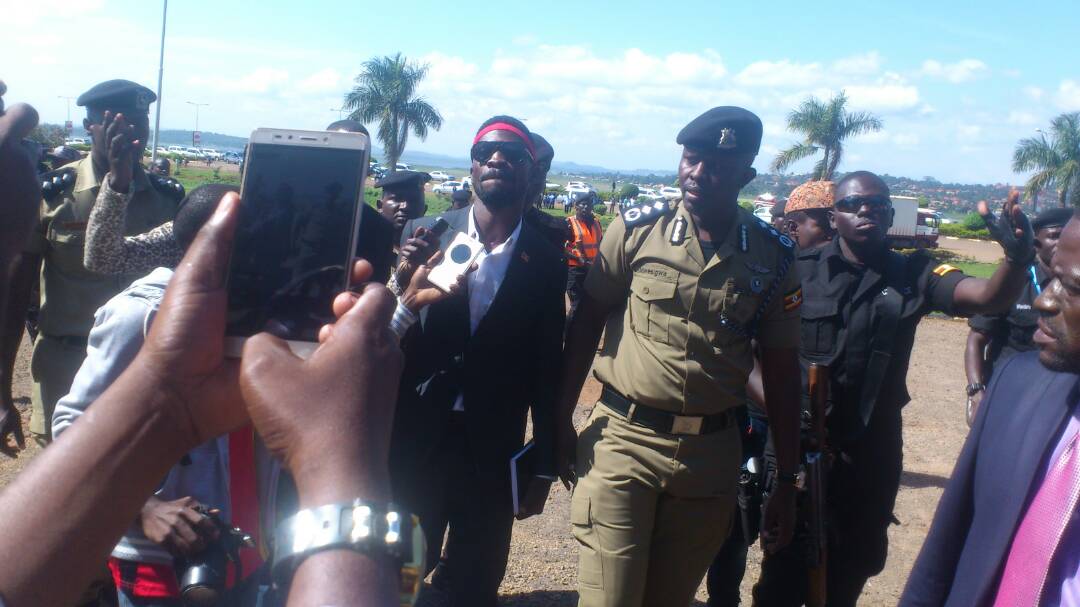 Police in Entebbe has this afternoon arrested MP Robert Kyagulanyi over the statements he made before he left for the US which police says were intended to incite violence among the populase something against the laws of the govt of Uganda.

Hon. Kyagulanyi ws out of the country as parliament was going to move a motion to amend article 102(b) which has parked emotion and divied the ruling National Resistance Movement (NRM) on grounds that some of the members are against it on grounds that it undermines democracy and rule of law in the country which the party fought for five years.

Kampala metropolitan police commander, one, Mwesigwa while arresting Kyagulanyi told the press that the legislator will have to record a statement over the message he issued and circulated on social media and then will be set free to proceed to his home something that angered Kyagulanyi’s supporters who had waited for him at the airport.

As the airport was crowd by the Kyagulanyi’s supporters, there was heavy traffic jam which forced police to tow the legislator’s car to the area police where he was going to make the state and some of his supporters were arrested at Kitara and Kisubi police stations.

Kyagulanyi in his social media message was rallying Ugandans not to give up on the fight to resist amending article 102(b) and promising the masses that he will fight to the last minute to protect it was strong to repeat the same statement as he was being arrested by police.

A section of ugandans have come out clear to protest the amendment as they fear that Uganda will turn into a one man leadership for the rest of time which might drive back the nation into chaos.

Kyagulanyi an artist who is known for his anti government song that move the nation is loved and followed by a good number of youth in the country which pauses fear from the state on his moves.