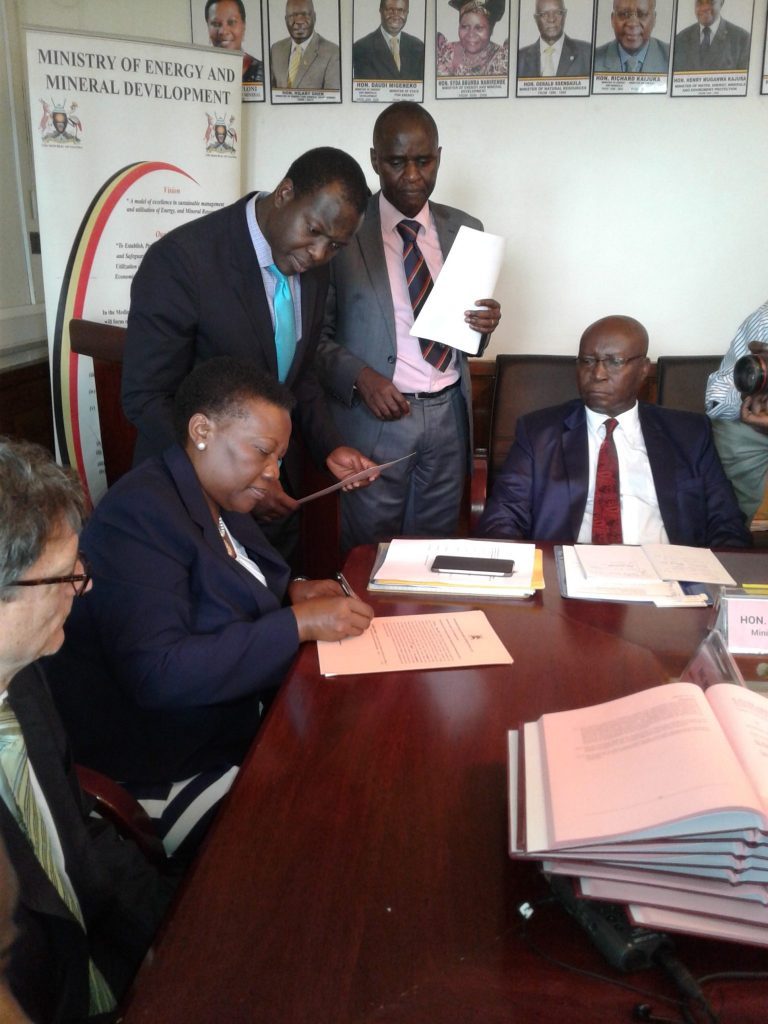 The govt of Uganda has today signed a production sharing agreement and issued license for petroleum exploration, development and production over the Kanywataba contract area with Amour energy limited from Australia.

Speaking during the signing ceremony at the energy ministry, the energy minister Eng. Irene Muloni said, this is the first production sharing agreement to be signed in line with section 58 of the petroleum exploration, development and production Act 2013, the legal regime under which she announced the first competitive licensing round during February 2015.

The signed pact between the govt of Uganda and Amour energy limited consists of key provisions that provides the company license with an acreage of 344 sq kilometers for four years, drilling at least one well, payment of royalty raging from 8.5% to 21% based on gross total daily production in barrels of oil per day, state participation at 20%, cost recovery limit for petroleum is set at 65%, production sharing, advisory committee chaired by the petroleum authority of Uganda and consists of representatives from the Ugandan government, a signatory bonus together with research and training fees and annual acreage rental fees for the fist exploration period amounting to USD.316,000 have been paid to the Uganda petroleum fund, a performance guarantee amounting to 50% of the minimum exploration expenditure for the first exploration period, taxes will be paid in accordance with the laws of Uganda and providing employment to Ugandans and training.

Still the permanent secretary ministry of energy and mineral development, Robert Kasande notes that one of the major achievements from this licensing round is the development of a state of the art data room which remains open to the industry to view and purchase data adding that it will also be used for future licensing rounds.

Meanwhile, the CEO, Amour energy limited, Roger Cressey expresses committement to follow all the production and exploration guidelines as they go on with business and confirms setting aside over USD.1.98Bn to facilitate the running of business in Uganda where he says there are more oil opportunities to explore in the near future.

Uganda currently boosts of 6.5 million barrels of oil in her wells and in this particular round, the ministry was able to generate USD.2.4 million from the sale of data to bidders which was paid to the Uganda petroleum Fund as confirmed by the permanent secretary to the ministry.

The coming of Armour energy limited makes the number of oil exploration companies in the country move to four companies with Tullow, Total, CNOOC already in business.