by Admin
in Business
Reading Time: 2 mins read
0
493
SHARES
1.4k
VIEWS
Share on FacebookShare on Twitter
Sugar Manufacturers Association Decry Diminishing Export Market For Sugar
By Admin
The Uganda Sugar Manufacturers Association have rushed to parliament to decry the diminishing export market for Ugandan sugar
Local sugar millers stuck with a surplus production of 160,000 metric tonnes of Sugar with no where to sell it.
But the ministry of trade says the industry is over subscribed which is causing a market crisis.
According to figures from Uganda Sugar manufacturers association, in 2020 local sugar millers registered a surplus production  of 150,555 metric tones and  this year the surplus is estimated to shoot up  to 160,000 metric tones. This has caused a stampede in the sugar sector and today 14 sugar manufacturers petitioned the parliamentary committee on Trade and Tourism to push government to find more export market for sugar.
Traders explained that they have not benefited from the east African common market as Ugandan sugar is facing rejection and import duty in regional markets. They also decried unfair sugar policies in South Sudan and Rwanda  which import duty free sugar from outside the East African Market which impedes the regional sugar industry.
However the minister of trade Francis Mwebesa told the committee of trade that there is over investment in the sugar sector which is causing a sugar market crisis.
MPs are concerned that if government can’t find  sugar market in the short run, many sugar milling factories are going to close sooner than later.
The committee also questioned the impact of the East African common market protocol, when Ugandan products are facing resistance on markets of partner states.
Out of the 90,000 metric tones of Ugandan sugar that Kenya cleared to be exported to its market this year only 32,000 metric tones have been allowed  from January to August 2021
Previous Post 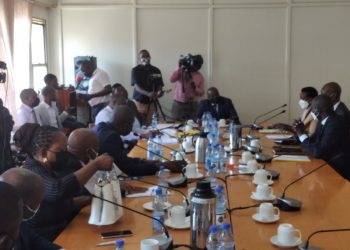 The fate of Presidential Directives on Roads The Uganda National Roads Authority has explained difficulties in implementation of presidential directives...