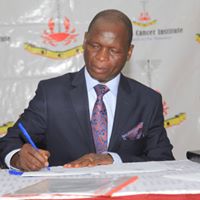 While appearing before the parliamentary committee on health chaired by Michael Bukenya, Dr Orem disclosed that even though the completion of the bunker is at 95%, the contractor still requires more 13 billion shillings to finish the work.

It should be recalled that the government of Uganda provided 25 billion shillings to ROKO Construction Company limited to construct six bunkers to alleviate the shortage of capacity to manage cancer disease using radiation.

The institute director however told   the health committee, that the contractor requires 13 billion shillings to complete the bunkers.

The bulding with six levels are intended for installation of additional four linear accelerators and two brachytherapy machines and other offices to fast track the next phase of modernization and expansion of radiotherapy services in the country and East Africa at large.

Roko Construction Company Limited was awarded the contract to build the radiotherapy bunker.